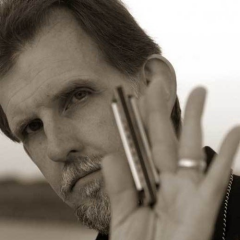 Born
1958
Country
United States
Comments
Singer/songwriter and "harmonica wizard" from Corpus Christi, TX.
His early career found him playing harp and singing with Dallas blues band, Mark Pollock & The Midnighters. Since then he has fronted several Austin bands (Teddy & The Tallops, The Tearjoint Troubadors, The Naughty Ones) and recorded with the likes of Dave Alvin, Omar Dykes, Jello Biafra-Mojo Nixon, Jimmie Dale Gilmore, Charlie Robison, Sunny Sweeney, Big Foot Chester, Dale Watson, Stephen Bruton and Augie Meyers. He co-starred with Nashville rocker Webb Wilder in the cult movie classic, «Horror Hayride». He has been a featured guest (harmonica) on Austin City Limits three times. As a member of Teddy & The Talltops, he appeared on TNN’s Texas Connection television show in the 90’s. He is a member of the Austin Chronicle Texas Music Hall of Fame and was honored with a star on The South Texas Music Walk of Fame in Corpus Christi, Texas.
Member of
The Wandering Eyes

Added by anto47
Managed by Moebeus

Bedside of a Neighbor

That's How I Got to Memphis