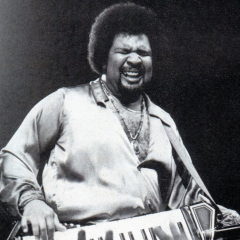 Born
January 12, 1946
Died
August 5, 2013
Country
United States
IPI
00048525764
00054845268
Comments
Although George Duke’s primary work was as a jazz pianist and keyboard player, he became a major figure in record production, pioneered the use of synthesizers in jazz-rock, and went on to become one of the most sampled jazz musicians by the hip-hop generation.
Family
Dianne Reeves Cousin

Added by koan
Managed by sebcat

Released on A Brazilian Love Affair (1980)

No Rhyme, No Reason

Every Reason to Smile

Released on Power of Soul - A Tribute to Jimi Hendrix (2004)