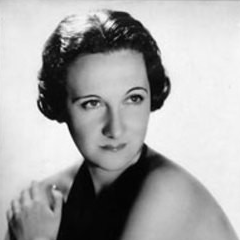 Real name
Margaretha Keller
Born
February 8, 1903
Died
November 11, 1977
Country
United States
Comments
Cabaret vocalist and actress, who was born in Vienna, Austria, where she studied dance from the age of eight followed by acting. Her début was in "Kabarett Pavillon" in Vienna. She also appeared on stage with Marlene Dietrich in "Broadway" in which she sang and danced. A recording contract with Ultraphon in 1929 took her from Vienna to Prague and Berlin, where she enjoyed great success with Peter Igelhoff and Peter Kreuder. She lived and performed at various times in Europe and the US.. For over 45 years her voice was familiar worldwide, in radio shows, films, revues, concerts and musicals, but above all in recordings.

A Little Ramble in Springtime with You

Released on A Little Ramble in Springtime with You (1937)

Released on I Believe in Miracles (1935)