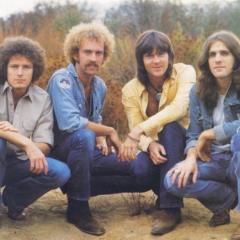 Years active
since 1971
Country
United States
Comments
One of the world's best-selling bands in history. Glenn Frey, Don Henley, Randy Meisner and Bernie Leadon, the four founding members of the group, had all been recruited by Linda Ronstadt in 1971 to play in her backing band. While on tour with Ronstadt, Frey and Henley decided to form a band together and asked Meisner and Leadon to join them.
Deeply rooted in the California country rock music scene, their style was also labelled as soft rock, folk rock, and arena rock.
Eagles famously underwent several line-up changes, broke up for the first time in 1980 and reunited numerous times since.
Members
Glenn Frey
Don Henley
Bernie Leadon (1971-1975)
Don Felder (1974-2001)
Timothy B. Schmit
Randy Meisner (1971-1977)
Joe Walsh (1976-...)

Added by Denis
Managed by Quentin

Take It to the Limit

Part of the Plan

Released on A Tribute to Dan Fogelberg (2017)